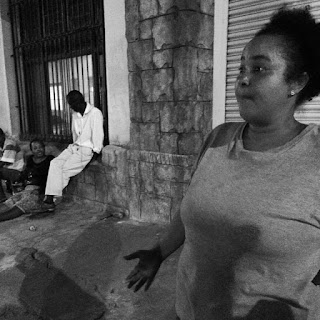 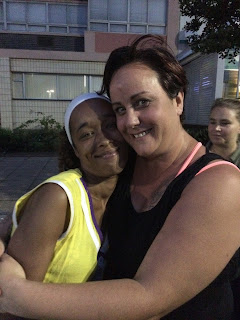 Vashti and one of 'her girls' 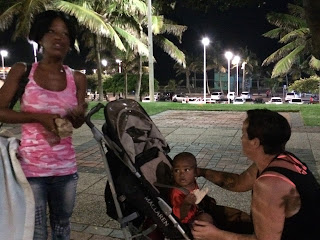 Our feet had hardly touched the ground after the beach cleaning, we collected the boys from their new school, all three have been given full bursaries at a lovely school. Their parents have been homeschooling them for a few years because schooling is so expensive in SA. But being given these bursaries has meant that they boys can fully enter into school life and our daughter and husband have more time to be ministering together.

After dinner Vashti told me we were heading out with the other two girls from the team to drop off some donations at the homeless shelter and then hit the sea front to minister to the sex workers.

I had been told about the homeless shelters and seen photos, but nothing prepared me for what I saw. Leizelle, in the top photo above, was my tour guide, one of the team came with me. Beds were lined up along the room, mostly 3 beds high, some with people sleeping on them, some not. All filthy, the smell was pungent, Lizelle proudly showed me her bed and then headed off down through the beds to show me the shower block, I sort of wished we had skipped that part of the tour. Lizelle was pretty drunk and I could fully understand why people who have to live in these places drank themselves to oblivion.

Next stop after the shelter was the sea front to find the sex workers, we had a car full of lovely canvas bags which had been donated by a perfume company. Each bag contained a perfume sample, an item of clothing, toiletries, condoms and any other nice items that the team had been donated. Some of the sex workers are already known by the team, others are new to the strip and the team make a point of introducing themselves and getting to know the girls.

The team collect bags from individuals too, who want to help support the work. People love to fill a bag with things which they think will be helpful for the girls. If the team know a girl has already had a bag they will give them toiletries, protection etc.

They drive up and down for about an hour, stopping when they see a girls and calling her over to the car if they cant pull up alongside. If they know the girl they will check on how she is, if she has any needs etc. The team purposely dont take money but they often take food and will invite the girls to come along to the feeding point the following Wednesday lunchtime.

If they dont know the girl, they will ask her name, age, where she lives etc. They will let her know about the feeding point and that they will be down on the sea from the following Thursday to check how they are and if they can help them in any way.

That first night I was struck by how young some of these girls are, some barely out of puberty. The team always offer prayer for the girls and more often than not the girls take up the offer. It was a privilege to spend time with these girls, to pray for them and to hug them. As I was doing so I wondered how long it had been since someone just hugged them for who they were and not for what they were.

I came home from that evening feeling completely shell shocked and so grateful for One Future Foundation and the team of girls who go out every week to catch up on 'their girls'.

If you would like to help support our family as they carry out their love and work with the homeless, you can do so by visiting www.justgiving.com/kingsroadchurch
Posted by lindsey at 05:55

That would be incredible hard to see. Your children are doing God's work and it is such a blessing to those they have met.

lindsey
I live in Hertfordshire, I am married to Ray who is a church pastor. I have four children and six grandchildren.